Report on my ever loving daughter Sabrina and the dream coming true of visiting “our Angels of the Seas”.

From our hearts to parents of a disabled child:

Heaven’s special child
There was a meeting a long way from Earth. 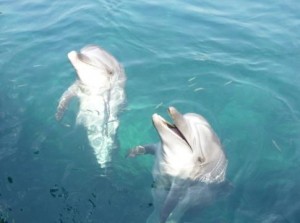 „It is time for another birth“ said the Angels up there to God, and this special child will need lots of love. Its progress will be very slow, achievements may not be apparent. And the people down there will have to take care of it.

It cannot walk, laugh or play like others, its thoughts will be of another world. Ignored by many people, as a disabled child it will always be at a disadvantage So let us be careful where we shall send it. We want it to have a happy and peaceful life. Please God, find us the parents who will master this difficult task for you.

They won’t know at first which important role they must play for this child who is very loyal and possesses a lot of love.
But soon the parents will realise their privilege in caring for this present from heaven. This precious charge, so gentle and mild, is heaven’s very special present. 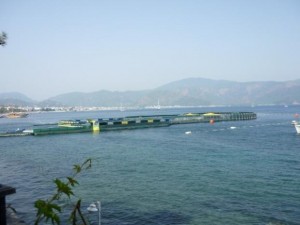 The planned child Sabrina was born on 27 February 1994. At the very first she had difficulties. She was a fine, little, sweet child and no one foresaw what our little ray of sunshine had before her. When Sabrina was 2 years old, a Cardiologist diagnosed the Williams-Beuren-Syndrome (www.williams-syndrome.ch). Then came the time of many medical examinations, hospital stays and visits to therapy. Even as a small child she had to learn to do without a lot of things. We had to constantly change our plans and lived from day to day. Then came Psoriasis-Arthritis which made everything even more difficult. The severe pain and infusions in hospital made Sabrina very tired. She was always a very positive person and fought, never giving up. The severe pain and the many hospital medical examinations made her sad. She often suffered quietly in order not to worry me as her mother. Sabrina never had any big wishes, but in the last few years, having watched a documentary on dolphins, she wanted to swim one time with the dolphins For a long time I thought this is one wish that I will never be able to fulfill, but then a little miracle happened. Exactly at the right moment Sabrina received a legacy and at the same time we received help from the „Denk an mich“ Foundation. We didn’t need long to decide and looked for such a therapy in the Internet. With a lot of luck we came across the Dolphin Therapy in Marmaris web-page https://dolphin-therapy.org/de and were fully, kindly and competently advised by Herr Wiengarn. Because we were coming from Switzerland we had to book our Hotel ourselves and we chose the Marmaris-Palace Hotel. 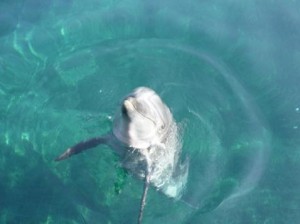 On 24. July 2010 we began our adventure. We flew with Air Berlin to Bodrum, where we landed on time and without problems. We were picked up at the airport by our Chauffeur and the tourist guide from Bentour and, together with another family, arrived 2 hours later in Marmaris. We arrived in the evening tired but excited at our Hotel. We just wanted to sleep and were happy to be there. We were shown to a very nice room with a dreamlike view over the sea and were astounded that everything had gone so well. The next morning, it was Sunday, we went down to breakfast and were met by a trainee from the Dolphin Therapy Center who welcomed us and gave us certain details of the course of the next fourteen days. We straightaway felt more at ease and were even more excited to see what the next two weeks had in store for us.

In the afternoon we had an introductory talk with the therapist and an interpreter in the Dolphin Center. Our Introduction was most sympathetic and competent and we were given all necessary instructions. We all introduced ourselves and the therapist asked questions. We met very kind people, Igor was the dolphin therapist, Beata the Physiotherapist and Sema the Cranio-Sacral therapist. Elena was the Angel who rescued us in difficult questions and translated. The next morning we also met the dolphin trainer Ricardo and the whole Omnega-Team, and naturally also the dolphins. It was phenominal. I can hardly describe the feeling. When one has waited so long for the moment, and then it arrives, one’s feelings does somersaults, there were strong emotions involved and a sense of joy that one would wish upon many others. Every morning our programme for the next day was on the board. In the morning therapy with Frosi, afternoons Physio, Riding or Cranio-sacral. The appointment times were almost always the same which was super for us. 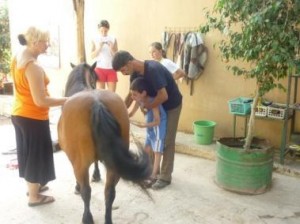 Sabrina always had the same team, Igor, Ricardo, Frosi, Beata, Sema and a super trainee Carmen or Valerie. The first day we got to know each other. The first therapy session was held very sympathetically.
Sabrina received a Neoprene suit, which she used throughout the holiday, and vanished to the platform with her new friends as a matter of course.

She got on well straightaway with Igor, who spoke mostly English, and Ricardo, who also spoke Spanish. I was amazed that she wasn’t frightened and wanted to enter the water with Frosi on the very first day. Certainly she had respect, but she was not accompanied by the usual fears, she was braver than she had been for a long time. She was singing and heartily laughing. It did me the wooorld of good to see my daughter so free and happy. The quiet way Igor had with her gained her confidence and she never felt under pressure which gave a lot towards this success.

After an hour we changed and went back to the Hotel to rest, eat, and then in the afternoon to Riding, Physio or Cranio.

Here too we struck gold. Sema and Beata helped Sabrina a great deal to be more courageous.
Both women’s happy demeanour did us a lot of good. 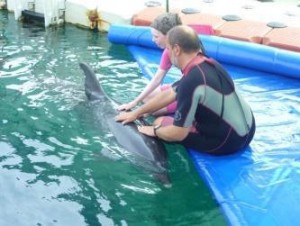 The first week we left out the riding because of the pain which she had had for months. Every day she made more progress. She was ever more courageous and from day to day gained more self confidence. Every morning she looked forward to her hour with Frosi and the dolphin team. She got on especially well with Barbara. She thinks she is mega sympathetic. We also enjoyed the company of other families and swapped experiences. We had a 15 minute march to our Hotel. On the third day Sabrina walked better than she had done for months. She wanted to do everything on her own, even brought me a drink from the bar, stayed alone on the beach when I had to get something and was always in good spirits. She made a lot of new friends.
We were the only Swiss in the Hotel and the only ones who were participating in dolphin therapy. She related proudly every day her new escapades with Frosi to the personnel and families. She even went with me, with hardly any qualms, into the sea by way of the ladder where the water eached up to her shoulders. There were stones there, no sand, but she accepted this too. We swam out quite far using a large float and she wasn’t afraid at all. Equally I could swim out on my own and she would stay without a problem on the beach. She had a lot of energy despite the heat and a lot of endurance.

The second week we decided to try the riding. It was super the way she simply mounted the horse and rode away with the superwomen Feliz and Claudia. 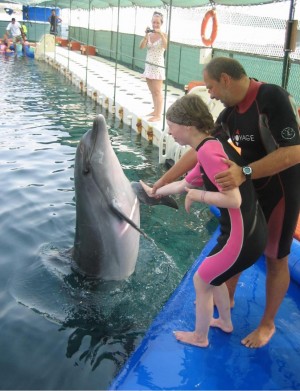 I was very proud of Sabrina. Luckily I made a video otherwise no one would believe me. Here I would like to pay a big compliment to the people on the Ranch, Feliz and Salih, for their way with children with many different disabilities. One feels welcome and one feels that they want to do their utmost to help the family. Even when one has to journey into the hills to get there, it’s worth it. It is very nice there in the middle of nature.
The highlight was the therapy with Frosi. It was like a dream to see how with each day more trust was created. One had the feeling that the dolphin knew one. Sabrina sang with Frosi, danced, played and swam with her as if she had always done so.

I often had the feeling that there was a deep connection, a level of exchange of which one can only dream. Even in myself, her mother, I felt a deep feeling of peace. I suddenly had strength and was thankful in the deepest part of my heart that we could experience this. We met very many kind people who have a calling to do their work with love and feeling. It is good that there are people like that. A big thankyou to the whole Onmega Team, especially Elena and Axel, you are all just super. We had a good time, a happy time that we will never forget. We hope that we will be able to visit you again in 2012. Sabrina will be turning 18 and that would be the best present for her future and for both of us.

Sabrina gained many positive results from her therapy. After our return she was repeatedly complimented on the vast progress she has made by many people, whether it was by her therapists, teacher, friends or family.
She is in the meantime much more courageous and bold. She can clearly say ”no” and not only to me as her mother. Her self-confidence and ”fighting spirit” has been revitalized and for that I am very thankful.
We had not expected anything and we have taken so much back with us. We know that the disability and the illness will remain with us and that there will always be setbacks to surmount. But no one can take away the experiences that we have made. These memories will always remain in our hearts and sometimes that can work a miracle. We will never give up hope and therefore we hope to see everyone again