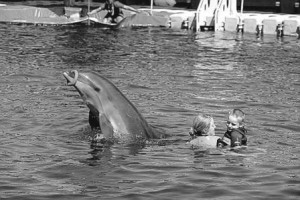 Calmly Torsten Panhorst starts his Laptop, clicks through the programmes and begins to watch the film of his son Jan-Richard playing with the dolphins. When Jan hears the typical call of the big mammal he stops playing in the living room and races around the large dining table to see  »his« Frosia on the screen.  Jan, remarks  Mama Petra astounded yet again,  has never done that before. He has become a lot more alert through the dolphin therapy.T he fourteen days in Marmaris, Turkey, were a great success for the  Panhorst family.

We didn’t mention the changes we noticed at first.reported Petra Panhorst. But it became evident even at school that something had changed”, said the 41 year old mum. Jan shows now, for example, that he is hungry. He fetches his bib on his own, remarked Papa Torsten Panhorst. If it isn’t in its usual place he even goes and takes it out of the cupboard.For instance when he fancies a piece of sponge cake, that he likes to eat.

Jan had to wait a long time for his dolphin therapy. A lot of people helped with collecting donations towards the cost of the flight, accommodation and the therapy. Jan and his parents, together with the family Yilderim also from Werther, travelled to Marmaris, turkey for a dolphin therapy from 12 to 26. September. There were another two families from Germany there. From the very first day we pushed the tables together. We were a super troupe, remembered Petra Panhorst with a smile. 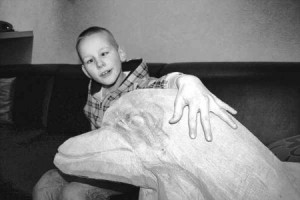 „It was great that Murat and Günel were there with us, added Torsten Panhorst. They knew their way around and could translate lots of things for us. The therapies for Jan and Can took place at different times. However the procedure was the same, explained Torsten Panhorst. First there was 20 minutes work on the platform, singing, throwing rings to the dolphin. Sit-ups were made whilst counting to ten in English. Then it was time to enter the water. And with a grin the forty-year old remembered that Jan always stopped his sit-ups at 9, because Nine sounds like the German Nein.

The dolphins , Torsten Panhorst tried to describe the dolphins  ease muscle tension through their sonic waves. This effect is intensified throughout the supportive therapies. Body contact to the animals is built up very slowly. He improved steadily with each successive session. One could see that Jan was loosening up, remembered Petra Panhorst. Such an animal is 3 meters long and weighs 300 Kilograms. It can swim at 40 Km/h. We had a lot of respect for the size of it, admitted Torsten Panhorst.

At some point Jan stretched out his hand to stroke the dolphin. A big success.  The highlight came later,  playing Dolphin-Taxi  – holding onto the fin and letting oneself be pulled through the water. It is astounding how much sensibility these animals have,remarked Torsten Panhorst. It even gave Jan a kiss.

Jan is now a lot more alert because of the therapy, said Petra Panhorst. When one calls him he looks up and even comes. Before one had to repeat oneself three or four times. He is altogether calmer and can concentrate better. One notices that he is more sure of himself when grasping something. These are all things that were not evident before.

Also films on TV are becoming more interesting for Jan – especially films about animals. And the music videos on MTV and VIVA.  I can definitely recommend such a therapy to anyone, said Petra Panhorst. It really is a wonderful experience – also for the parents who can see what the children are doing and how much they are enjoying themselves

We would like to thank everyone that made this therapy possible for Jan , said  Torsten and Petra Panhorst. And he stated quite clearly : We did not take our experiences there for granted.

For dolphin therapy related questions you can contact family Panhorst via

Please click here for the origin of the news

Dolphin Therapy for Stephanie Jasmin with the Angels of the Seas