Küssaberg – Nick Jerome’s lot and the call for help from his mother moved a lot of people to make donations for the autistic child from Dangstetten. 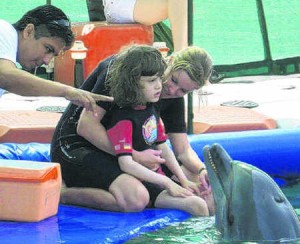 Dolphin therapy successfully completed: Nick Jerome, the six year-old autistic child from Dangstetten, made many small improvements. Mother Daniela Klein is happy and thanks everyone who through their donations made this therapy possible.
Photo: Private

The donations were to help towards an expensive dolphin therapy and give the six year-old more quality in his life. The therapy has in the meantime taken place „And Nick Jerome has made a lot of little improvements“ reported mother Daniela Klein overjoyed.

The mother, a single parent, chose to seek help from the public. For the good of her child. „Because we would never have been able to afford such a therapy. But through just such a therapy so many improvements have been made in the development of autistic children.“ Daniela Klein wanted to leave no stone unturned and through her perseverence gained financial help. „Even from complete strangers“, said the mother visibly moved.

Private individuals, Clubs and Schools donated for Nick Jerome. And at last the day arrived that the boy was well enough to travel. Not so far as was at first assumed. Daniela Klein learned during her appeal of successful therapies in Turkey. And she readily chose this to save her son the eleven hour flight to America.

The journey was strenuous for both mother and child. „But a successful therapy is the only thing that counts“, Daniela Klein doesn’t look back. „Since the dolphin therapy my son is always in good spirits. He talks and sings. He is extremely fit and alert. He can even climb the stairs on his own without me having to carry him half the way. He can tolerate his medication much better – and he eats“, said Daniela Klein overwhelmed, who during the therapy had a big problem. Her son didn’t want to eat.

Daniela Klein thanks everyone who contributed to the successful therapy – every single person. Many donators, who mostly didn’t even know six year-old Nick Jerome, but who were moved by the ill fortune of the family.

Our dolphin therapy with Marlies was a very pleasant experience. Practical training report From Mag. Carmen Viereckl, Diploma of Psychology