Seizure situation before start of the therapy sessions

Short-term reaction on site already after first therapy. She looks at Sandra more and more after Sandra calls “Nele”, to the left! and reacts to suggestions “do you want to drink?” 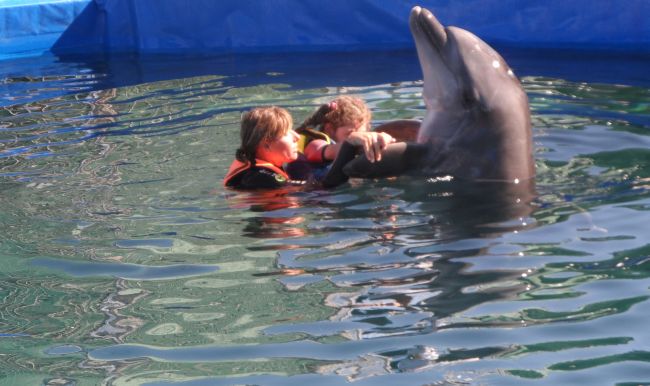 After further therapy sessions, spasticity is loosened. Despite loose limbs, Nele has better head posture, better stance, less leg-crossing. First indications of connections of senses hear-see / feel-see become apparent: Nele hears a dolphin sound and directs her eyes and head directly to it, the KG gives a ball in her hand and Nele’s eyes / head go to the ball. Overall analysis after therapy: Significant increase in phonetics and articulation with hands and feet, a few times I and other people are under the impression that the calls me.

Nele looks around the room significantly more, her look is more intense, frequent fixation of the eyes on objects / movements or eye contact. Stance and head posture remarkably improved. Spastic movements are reduced / less tonus. Focal seizures frequently stop before they can be called a seizure. Eyes begin to wander to the right in known situations, short pause then it is over. More orientation / look to the left. Improved oral motorics, faster, more versatile and almost no more swallowing.

Weight increase 1kg/ growth ca. 2cm. Significant increase in interaction, Nele directs her attention to people who work with her and she tries to achieve tasks. Eye contact, “open your hand” fingers move. 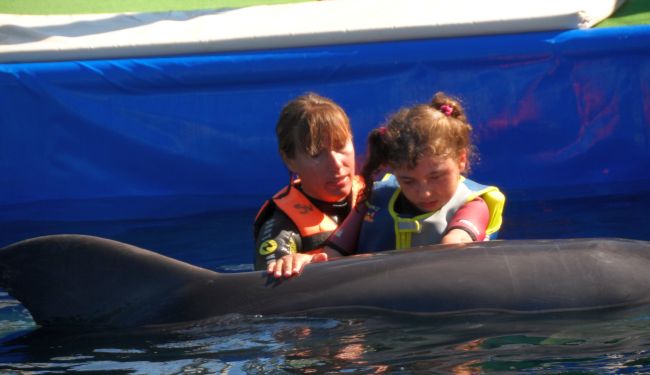 Nele holds her head freely much more (although mostly a little to the right). She hold herself up much better on the lap, drinks better, coughs mostly because of throat irritation not because of swallowing, can drink several sips without pausing, shows clearly with body and defensive reactions when she needs a break, then takes load on the feet and helps raise herself up into positions where she can better cough/burp/calm herself down.

Nele’s progress is fascinating, I am thrilled every day how much Nele realizes and how she now actively participated when special tasks are demanded from her.

The dolphins trigger communication with them and other beings in Nele in everyday situations, in a way I have never seen it in another therapy and other animals. There are still further tools necessary to extend the therapy results and maintain them as long as possible. Spasticity increased again after a few weeks until we were able to utilize the Kosys in a way that it fostered reduction.

The osteopathy experiment with craneosacral therapy reconfirmed my apprehension in Marmaris that dolphin + craneo are too much for Nele: She had a lot of seizures with series of throwing up for 2 days, was very tired for 3 days but then benefited enormously from the therapy – if I am to come to therapy in Marmaris again, I would wish for a craneo before the first day of dolphin therapy, but no longer together at the same time.

For dolphin therapy related questions, you can contact family via [@encode@ email=”f.honeck@rfk.landeskrankenhaus.de” display=””]