We have been back home from Turkey for 2 weeks now and it is time for us, also in the name of our 3 foster children, to thank you for the amazingly generous donation for the dolphin therapy.

A very intense, sometimes also exhausting and yet relaxing time lies behind us. We will still need some time to process all the impressions and to talk with our doctors and therapists about our children’s progresses, changes and the next steps.

Before we talk about our individual children, some basic and very important information: We highly recommend the therapy center near Marmaris/Turkey! The animals are held in ocean opens, they are allowed to decline working sometimes and we never saw any negative handling of the dolphins. On the

contrary, the animals were quite happy and enjoyed the time with our children. We  adults also got the chance to swim with the dolphins a few minutes a few times; it was an amazing experience. These animals are very special creatures. It was interesting that “our” dolphin Daisy behaved very differently with each child, she could obviously sense exactly what each child needed.

Each therapy dolphin has their own trainer, and for each unit there is also a therapist present. This  therapist guides the families from the introduction to the final discussion. The first minutes in each therapy unit are to have contact with the dolphin. The children sit with the trainer and the therapist on the platform, they get to throw balls and rings in the water that are then brought back by the dolphin, they can pet the animal with their hands and feet and if they wish they can give the dolphin a piece of fish.

Then the therapist goes with the child into the water, if needed a parent can come along. The therapies are very different from each other; each is adapted to the needs and capabilities of the patient. The patient does get a lot of direct contact with the dolphin and after about 45min the therapy unit is over and the dolphins get a break until the next patient.

All patients are provided with a wetsuit for the duration of the therapy and wear a swim vest in the water. The contact to the therapist is quite close and every change in the patient is discussed.

In addition to the dolphin therapy there are other therapy types that are again matched to the needs of the patient. At the Dörtnal‐Ranch, under the supervision of a German doctor, there are several horses that are used for hippotherapy. The families are driven to the ranch and then back to the hotel in a minibus, which is free. The hippotherapy itself was extraordinarily matched to the needs of  each kid. The atmosphere there is quiet and very nice.

Some patients require more physiotherapy, massages or the Cranio‐Sacral‐therapy. If needed these therapy types are also included and rotated in your therapy schedule, again matched to what the patient needs or wants.

Another doctor offers a psychological talk and a family therapy session, Mr. Linke, the owner of the therapy center also takes care of the patients, their families and what is most important: All involved doctors and therapists talk daily with each other to plan how to proceed. The families are, if they wish so, supported by the interns‐ so that they can also have some time to relax. Add the great scenery, the hotel with lots of entertainment offers, the good food and and and….!

Now to our three therapy children:

It was the second dolphin therapy for our 14‐year old autistic foster son Silas. During the first therapy 2 ½ years ago in Kas/Turkey he began to write about his feelings. Back then he wrote (Silas cannot express himself verbally in an adequate way and so he writes on a PC) about different people in him‐several things pointed to an additional psychosis. His main problem however, is his extreme automatic autoaggression that makes it necessary to permanently immobilize/fixate his hands.

This time he immediately began writing, as with the last therapy, but then also started to talk.The sentences became longer and made more sense. This is a huge success, at home Silas now talks more and it makes sense. It was interesting that Silas could understand Turkish and could, at least for a  short time period, also talk in this language.  We are very excited to see what the coming weeks and months will bring, as all these new findings require intense professional treatment and guidance.

Early 2006, our clinic told us that we had achieved very much with Silas, but that no further progress could be expected. We experienced, through this dolphin therapy that Silas’ development is not at an end and that with a lot of patience and therapeutic support there is potential for further evolvement. For Silas we hope for more donations, because the time with the dolphins opens doors to himself and also opens the door to communicating with this traumatized and autistic boy. Silas wrote us that he needs another dolphin therapy. 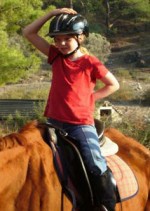 The therapist was very skilled in communicating with Silas and protecting him from his autoaggressions during the therapy. With every person who accomplishes this, Silas becomes a bit more independent, as he will not be fixated only on his foster parents and his school guide. The hippotherapist also dealt very well with Silas and gave him the needed security. Silas had a lot of  fun riding‐ he always sat together with the therapist on the horse. His fixation relaxed temporarily.

Silas started the dolphin therapy with mixed feelings. On the one side he was afraid of the expectations we had for him, on the other hand he was very excited to spend time with the dolphins in the water. Thus his moods changed extremely before and during the therapy. We had just arrived when Silas found out the name of the dolphin (we lived right next to the dolphin center and could always hear the animals), and he permanently called its name. He could hardly sleep the night before the first therapy because he was so excited, but he was also extremely autoaggressive. Once in the water, he sang whole song lyrics and laughed often and loudly. Then he made noise in very low tones, which was not like him at all. In any case, it was very interesting.

Our almost 9 year old foster daughter Alina had lots of fun with Daisy. We had hoped for her self confidence to increase through the therapy. She was very responsible towards the animals and enjoyed her time with the dolphin a lot. The therapist was able to motivate her to amazing achievements with a lot of praise. At the Dortnal Ranch Alina got real riding lessons instead of Hippothearpy. She was very proud of herself and became very confident. Alina received Cranio‐Sacral therapy twice. After both times she was very open and told us about her feelings and thoughts about her past. Overall, Alina has been much more open about her feelings since the dolphin therapy. She is interested more in her surroundings, notices the feelings of her family and others and names her own needs clearly and with more confidence. We are convinced that these 2 weeks of therapy time have brought her months ahead in her development.

Our 5 year old foster daughter Chantal flourished during the dolphin therapy. From a shy little girl she developed to a child whose favorite word became “alone”! Until now her life was full of fears. She was afraid of music, afraid of being alone, afraid of being abandoned, and also smaller fears such as the fear of water. Until now she had held on to us during visits to the pool as if she were about to drown and even with swimming aids she panicked when we let her go.  After just 2 therapy units with Daisy she demanded that the therapist let her go, because she could swim alone with the dolphin!!! She did the same with us in the pool and in the ocean and could now swim alone (with swimming aids). Chantal enjoyed her time with the animals immensely.

At the Dörtnal‐Ranch she did not only “ride” her horse “Bambi”, but also one of the dogs and she could hardly await her turn to go riding. Chantal was able to hold herself on the horse quite well, despite her musclehypothony and was ready to do some small gymnastic exercises on the horse.  Chantal also received two Cranio‐Sacral therapies, but we did not notice any changes in her after them.

Chantal began to talk a lot during our time in turkey. Her sentences became longer and her pronunciation became a lot clearer. Her inner blockades disappeared in an extraordinary way. She could, for example, dance around and let herself go to the music; she moved around freely and did not care about what was going on around her. We really hope that she can take this positive change with her into her everyday life, because at home she is not quite as changed as she was on vacation.

Now to the end of our report. There is more that could be said, as the time was also very intense for us foster parents. Ten days we were followed by a camera team that is working on documentation about Silas. This meant that we had to deal with our background and history with these three children and especially Silas. This included not only the life of the children but also our feelings, personal changes and changes in our social environment (friends, family…). We had to confront ourselves, our care of the children and thought a lot about these things and what changes we could make.

The discussions with the doctors and therapists strengthened this process immensely. We do not think that this thought process is over with our return to our daily lives and we believe it will continue into the future. We think we have a lot of work ahead of us regarding ourselves, but especially with our children and hope we will get the right support back at home.

We would like to thank you all from the bottom of our heart! You made this all possible with your donations and helped our three foster children in a very special way.

In the name of Silas, Alina and Chantal a huge “Thank you and God Bless”!
If you would like to see more pictures, we can send you a CD!