First of all, Annika is 13 years old and weighs only 25kg! But she is a pack of muscles, very resilient and mostly very happy! 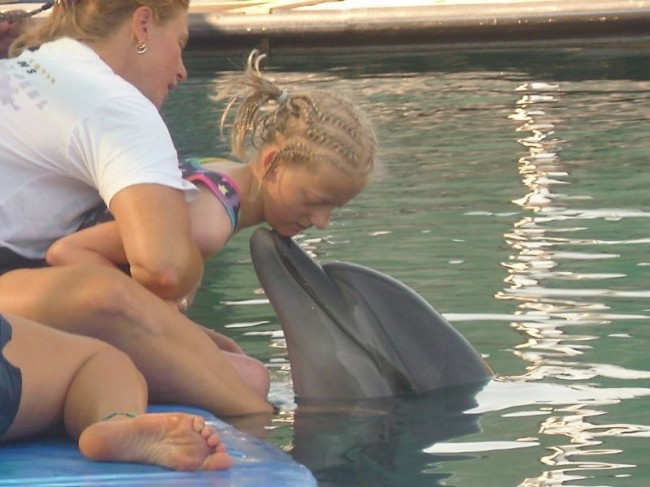 We booked through Delfintherapiereisen Megasport in Germany. That was very simple. At the beginning of the year I sent an e-mail stating the dates I wanted and travelled at the beginning of the Summer holidays. Megasport sends all the supporting documents per e-mail – one can also print them and fill them out at leisure! As I had a few questions I phoned them up and everything was answered, very nice and friendly. I can recommend that.

Annika flew for the first time! I was worried mostly about the flight. How would it be during pressure changes? I had previously obtained ear drops and nose spray from the chemists and just before take-off I filled her beaker with something to drink – to swallow! That helped a great deal, so that she had no pressure on her ears.

My second worry was how she would sit in the aircraft. I had brought another belt for her chest – round the back of the seat and to be fastened over her chest – but it was unnecessary. The normal seat belt held her very well and if she tipped forward or to the side I was able to hold her. Our meal was noodles – super for Annika!

I had the impression that it was exciting for her. She loves riding carousel – the higher and faster the better.

We arrived at the Hotel Mares very late (9pm) it was already dark in Turkey, but we received an evening meal and everyone made us most welcome. The food was great in any case – all meals were presented in Buffets – and all variations of noodles. For breakfast I had brought porridge, (2 bags), which lasted the whole two weeks because she also ate other tasty things. ( like pancakes filled with nut-nougat cream).

We had been promised a room suitable for the disabled, but we were given a normal room. No problem for me, though, as I had brought a toilet chair for Annika from home. (this counts as medical baggage and is not deducted from the 20kg limit, it is free). The shower was so big that I could use it together with Annika and her toilet chair. There was only one small step to carry the chair over. In the room were instructions as to where I had to go and at what time – everything was very well organized. 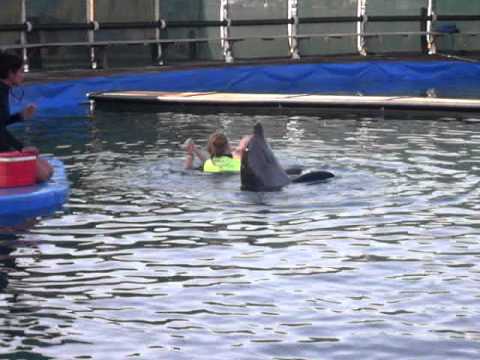 Our appointment for dolphin therapy was the first, at 9am, when it was not quite so warm. The dolphin therapy started at the edge of the pool. Annika had to throw a ball or a ring into the water and Frosia (the name of “our” dolphin) brought the items back to her. Annika held her feet in the water and Frosia swam past. Annika gave Frosia a “kiss” and they danced hand in flipper. The whole time the trainer, Barbara, held and supported Annika so that I could lean back and relax and was not anxious about Annika – a very nice feeling for me! In the water Annika wore a life jacket and there, also, Barbara supported her very well. Annika had so much fun with the dolphin that I often had tears in my eyes. In the mornings Annika also had Physio- and Cranio- therapy. At 2pm we were picked up at the Hotel and driven to Hippo therapy and at 5pm we were back at the Hotel.

We always then went straight to the beach and cooled off in the water. As we were there at the beginning of the Summer holidays we always had warm weather and sunshine, sometimes up to 46°C. In the Autumn holidays everything is a bit cheaper, but then the air and water is cooler. And as Annika feels the cold so quickly, we chose the Summer holidays. Fantastic!!!!!

The only hardship we had to put up with was that the path between the Hotel and the beach was strenuous. To the beach it was downwards, pretty steep, and not tarred but flagstones joined with cement. The way back up was strenuous, as I was pushing the wheel chair on its two large back wheels so that it didn’t wobble too much for Annika. It would have been a lot easier with a Reha-Buggy or a Jogger! – As I am a positive thinking person I saw it all as a work-out:-)

After the first week Annika had two days of home sickness, between therapies she was always crying and we telephoned a lot with Grandma, Grandpa and her sister Tanja, went early to bed (9pm) – had a cuddle and then slept. Annika had never shown home sickness, I was astounded. This was also progress, even if it wasn’t nice! But after 2 days she was fit and happy again.

One evening a dolphin therapy trainee took Annika to the kid’s Disco! Annika wouldn’t let me come with her even just to take a photo! Without Mum at long last!

We would like to visit Turkey again for another dolphin therapy, but this time with the whole family.

Annika benefited a lot from the therapy. She is much quicker with her speech computer, she is more alert and strong-willed (which is not always a blessing). She was dismissed from class at school a couple of times because she gave no answers with her speech computer, preferring to listen to music. For me as a mother it was no holiday, but nevertheless it was a wonderful time for us both!!!! We’ll be back!!!!!!!!