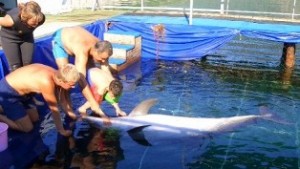 My son Ahmet Hamdi has been diagnosed with autistic mental and motor retardation. He has also some spastic characteristics and hyperactivity problems. The doctors we consulted suspected Williams Syndrome but it could not be diagnosed with any certainty because these tests cannot be undertaken in Turkey. Because of his general condition, he could not speak nor could he take care of himself. He was attending a special rehabilitation Centre in Gaziantep, the town where we have lived for the past 5 years. One day we heard on TV, quite by chance, something about dolphin therapy and we made investigations in the internet, subsequently we made contact with the Centre. We went to Kas on my vacation and had a screening with Dr. Galina. After her evaluation we decided on a course of Therapy. Our first interview was in July.

Our therapy would start on 11th September. We drove to Kas with our car and we stayed at the apart hotel ALI BABA.

The 12th September was given as our therapy date, so on that day we went excitedly to the therapy Centre. But in the Centre they told us that there was a mistake and our therapy would start on the 13th of September. There was nothing we could do. We returned to the hotel and extended our reservation for one more day but our enthusiasm was deflated.*

The next day, we went to see Mischa at the stated time, and the Therapy had begun. Just as everything was carrying on very successfully, we learnt, on the 3rd day, that Mr. Ahter who was helping my son Ahmet Hamdi would not work with us anymore. This state of affairs affected us very much. Mr. Axel came to us to discuss the situation and informed us that we would continue with Miss Svetlana. He also told us that this situation would not affect the therapy, and that the most important part of the therapy is to be in the same environment as the dolphin and to receive the sonar waves emitted by the dolphin. Mr. Ahter entered the water and showed my son what to do and helped him, but Miss Svetlana did not do this and wanted me to enter the water. One other problem, maybe the biggest one, was that our therapy times were close to evening. The temperature was evidently decreasing and the wind was coming up. Since my son has a weak constitution, he was trembling when he came out of the water. We tried to clear this problem using two towels.

The therapy continued with some troubles. However, on the 8th day of the therapy my son did something which he has never done before. At night, while we were sitting on the balcony, he stood up and began to sing a refrain, a part of a song. Ahmet Hamdi, who could only vocalize just a few words until that day, was singing for the first time. I would have cried with joy but instead of crying, I praised Allah once again, because He had given us the opportunity to meet with Mischa.

Eight months have elapsed since then. The reason we waited so long to make a report to you was that we wanted to observe his progress and provide more detailed information. Within the elapsed time, my son could sing a few more songs. He can say 15-20 times more words than before the therapy. He can keep more contact with his mother and sister. When he is hungry he can express himself that he wants food. When he needs to visit the toilet he goes to the toilet by himself (although he cannot clean himself). He also has fewer problems with his teacher at lessons.

We don’t know what life will give us or will take away. After all the difficulties we have experienced, a little smile we gain is worth all the effort, especially if it from your own child.
Thank you all 🙂

For dolphin therapy related questions you can contact this family via email:saglam27@hotmail. com