Dear Therapy Team!
As promised, here follows a Summary of our Dolphin Therapy in Kas.

We had been previously informed that the Transfer from Dalaman Airport to Kas was functioning well only intermittently, and as we didn’t want to spend three hours in a cramped tourist bus we booked at short notice a `special Transfer` – expensive, but it saved us trouble with the transfer.

The Hotel was suitable for the Handicapped, the personnel was friendly. We were booked in the Hotel Phellos. We were told that ramps were present in the Reception area for children in Wheelchairs and Buggies, we still had to contend with one or two stairs, but there are no Hotels in Kas with lifts. The hotel food was very good. A small criticism is that because of the half-board, the cost of water and juices for the children is not inclusive. 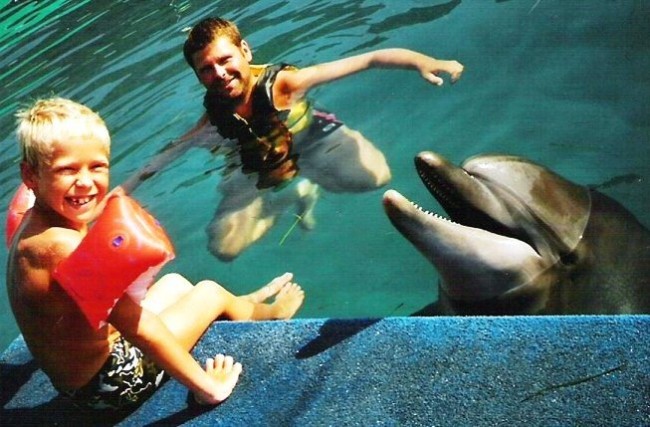 The Therapy team must be highly praised. The physiotherapy with Mr. Ahter Sümbül was very professional. One receives also a very detailed Report over the work of the Physiotherapist with the child. The sessions last about 1 hour. We were very enthusiastic about this therapy. One can take home lots of new information and knowledge. 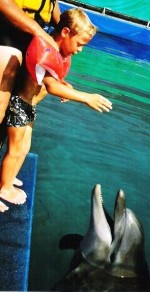 The local supervisory staff comprised 3 interpreters and one bus chauffeur. This team was particularly a massive help. They provided a really great service. Not only were we taken to the Dolphin Therapy with the bus, but also to the beach or the chemist or wherever we needed to go. The Team also undertook occasional babysitting, so that we parents could switch off for an hour or so.
OK, now to the reason for our trip, the Dolphin Therapy:

As we had already undertaken a `Therapy Experience with Dolphins` in Cuba, we brought with us certain expectations to Kas. The `Russian Method` of Dolphin Therapy is quite different to that on offer in Cuba (or to that in Florida).

At first we were disappointed, because nothing much happened. Also Tobias was unsure of himself because no one told him to do anything. He was allowed to stroke the dolphins, swim with them, throw them the ball and so on, but all without pressure. The dolphin did not play the role of being a `Reward`, not even as `Motivator`. He was just there, and Tobias, who was always with a parent in the water, could decide mostly himself what he wanted to do. Now whether that is extremely good or bad, I would not like to say. I must admit that at first we were disappointed, also because Denis, the Beluga whale, was ill and we never saw him. So every day Mischa the dolphin was there, and the Therapy was similar each day. 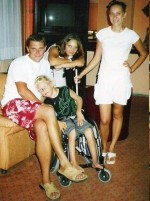 Before the therapy began, Dr. Michael treated Tobias`spine (something like Manual Therapy). What troubled us during the Therapy sessions was the fact that the Doctor did not enter the water with Tobias, to work together with the dolphin, but instead sat on the edge of the pool and gave instructions from there. But like I said, at the end of the Therapy we came to the conclusion that the peacefulness and harmony that is produced by this form of Dolphin Therapy certainly has its advantages. Tobias enjoyed the close contact to the dolphin during all the therapy sessions very much. And especially because he could, without pressure or continual demands, swim with the dolphin.

Taking it all together, we enjoyed our stay in Kas very much. The supervisory team was excellent and the local organization functioned very well. We can neither criticize nor extremely praise the Dolphin Therapy. It is a Therapy to which there is no comparison.

Please address any questions to email :

Best wishes to all !
Andrea Huber