Manuela Lenuweit from Priestewitz in Saxony says dolphins are the angels of the seas. And she is still astounded by the immense progress her seriously ill daughter Victoria has made thanks to the gentle animals. 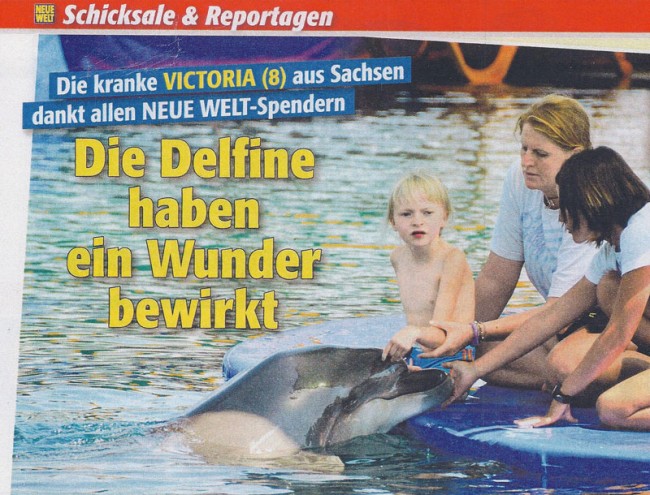 The eight year old girl cannot eat or drink on her own and sits in a wheel chair. Doctors have been unable to diagnose her malady. They have no idea from what she is suffering.  Manuela Lenuweit will just have to reconcile herself to her daughter’s fate was the only advice she was given. But for the 47 year old giving up was out of the question!

She has made great progress

A Dolphin Therapy in the coastal Turkish town of Marmaris appeared to be the only help for the little girl. ‘We were grasping at straws’ remembered Manuela Lenuweit. But unfortunately it was much too expensive. In despair she turned to the public. The readers of ‘NEUE-WELT’ showed their generosity and donated a lot for the little girl. The sum of 9450 Euros was soon reached. At last it could begin!

And all the trouble was worth it: the therapy was successful. ‘Victoria enjoyed the two weeks with the dolphins and made much progress’ related  Manuela Lenuweit. ‘During this time she was a lot calmer and well adjusted, she made sounds and even one time said ‘Ja’ – something that up to this point had been impossible. It was a miracle for us all’ said the loving mother.

Her thanks goes to all the people who have donated without whom this would never have been possible. The seriously ill Victoria is now feeling a little better thanks to the Dolphin Therapy