Experience Report of the dolphin therapy of Jessica Sophie Stock from 13. to 27. October 2007 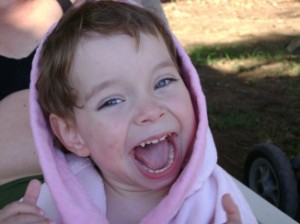 I am now sitting here and trying to find the right words to describe our experiences and impressions from October,but it is not that easy. Where do I start? Best to start with our daughter: Jessica Sophie was born July 2004 and was born two months early. Her health conditions were first attributed to her premature birth.

However, after a while we could not believe this anymore. A long period of physicals and hospital stays began. Then, beginning of 2007, the diagnosis: Coach-Syndrome. What is this?

It is a very rare metabolism disease, worldwide only 20 cases are known. Thus, there is not much experience with this disease, but the University of Washington in Seattle is currently researching it. So now we had a name for the condition of our daughter, but this did not really help us much. It was recommended that we do physiotherapy and early intervention with her.

Our daughter is three years old, but is at the developmental stage of a one year old and especially behind in her motoric skills. She can not walk or speak and she can only sit by herself since the end of 2006. Mentally she is more advanced than her motoric skills, which does not exactly make things easier. Despite this, our daughter is a small little sunshine, who can “command” her surroundings without words.

So we began with the alternative therapies: naturopathic doctors, Homeopath, Cranio- Sacrale-Therapy, Hippo-Therapy. And then we had the idea of dolphin therapy, because we wanted to give our daughter all possible opportunities. But America is very expensive, so although we had the idea in our head, we were not sure on the implementation.

From friends of ours we then got Axel Linke’s address in Marmaris, as they had been with their own daughter twice, back in Kas. Then the internet surfing began, collecting information about costs and possible donations. Then we decided even if we have to pay for it ourselves, our daughter deserves that we try everything. So we booked. Then waited for the flight. And then it was finally time, we were in Marmaris at the dolphin therapy centre. The organization was great. We do not want to say anything about the hotel at this point, as the location is being changed anyways and so it does not matter. Our welcome-talk with our therapist Barbara was great. We immediately liked her and so did Jessica Sophie, which is unusual for our daughter, as she is usually very sceptical and shy towards strangers.

And then it was finally time. Our dolphin therapy began and our dolphin Daisy was introduced to us; with 2,60m a very impressive animal.

Barbara quickly understood our daughter and was very tuned in to her needs and designed the therapy towards her needs and capabilities. After the third day we parents hid and kept ourselves in the background and let Jessica Sophie on her own during the therapy, as otherwise she kept looking at us for reassurance. But we followed and filmed everything from our “hideout”. It was nice to see how Jessica Sophie enjoyed it more and more each day and how much fun she had feeding Daisy. The touching, petting and playing also got better and better.

During the therapy there was already progress in her concentration and fine motoric skills. Now that we have been back home for 2 weeks, we have gotten lots of feedback from our therapists here. They all agree that Jessica Sophie is more open now, she can grasp better and can concentrate better. It is hard to describe what has changed, since she is not suddenly walking or talking, but she is different. She could already stand somewhat with help before. But now she is getting better and better and the will to walk is very strong. She is still missing the implementation of the sequences in her head, but we are positive for the future. We will see, maybe this year we will get a special Christmas present. We will keep you updated of course. We would like to thank our therapist Barbara again, she was so nice and patient with our daughter and she sang for her like a world champ during the 10 days of therapy. 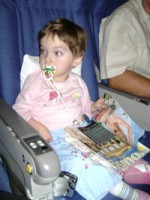 We would also like to thank the trainer Violetta and of course Daisy. We think that we will see each other again in the near future, as we are planning to repeat the dolphin therapy at your new location. Next to the dolphin therapy we did hippotherapy at the Dörtnal-Ranch daily with Salih and Feli. However, our daughter did not really befriend Salih, which is a shame since he is a
great guy. Instead she went riding with Feli and that went great. It was not really new for her as she knows Hippo Therapy from back home. At this point lots of greetings and a big thank you to Salih and Feli.

Dear Axel Linke, a big praise for your work as well and good luck with the new location.