THANKYOU to Barbara and the whole TEAM!!!!!

We had an unforgettable and also for us parents an instructive time in Turkey with the Onmega Team and the dolphins. ( https://www.delphintherapie.net/ ) Our outward journey was strenuous because Anna didn’t want to sit still. But still it worked better than we had imagined. (we were a little anxious about the long flight and the 90 minute bus transfer)

From the very first second we felt at home in the Hotel Mares. Everyone was so kind and friendly.

On the next day in the afternoon we had our introductory talk. The therapists wanted to know everything about our daughter. We didn’t know everything ourselves. More about that later. But we had to answer the questions. We didn’t have a diagnosis for Anna in the sense of a syndrome. Anna has serious neuromuscular hypotonia and static metabolic retarded development of unknown origin.

We began on the next day. At 10am the first dolphin therapy. We were very excited. Anna was in the water with Barbara on the very first day. She had previous experience with dolphins (we were in Benidorm, Spain, twice before). So she was not afraid of contact. Wow!!! Splash was with Anna the whole 30 mins. Either at the platform or in the water. That was really super. We had none of this intensive contact in Spain. It was tremendous and the feeling was indescribable. We were fascinated every time when Splash was with Anna. It was a special moment for Anna and for us. It is magical! The dolphins radiate something very special. During the therapy sessions Barbara attempted to calm Anna and open her hands. This worked very well. After about half of the sessions Anna found out that it was a good feeling to open her hands and relax lying on Splash. Towards the final session Barbara could let go of Anna and she held onto Splash herself.

Barbara knew what she was doing with Anna. She actually managed to get Anna not to put everything in her mouth but to hold or throw something to Splash. Barbara showed a lot of empathy but was also strict.

The best way for Anna.

At the end of every session it was also nice to see Splash come onto the platform so that Anna could lay her hands on the dolphin. Finally Splash waved his flippers, Anna knew then that the therapy had ended.

Anna also enjoyed physiotherapy with Claudia and Logo therapy with Annett. At least Anna was always in good spirits afterwards. Unfortunately she cannot speak to us. We could relax and drink a coffee on the terrace whilst Anna ‘worked’. The view and the peacefulness was simply wonderful and indescribably beautiful. The hotel lies in a picturesque bay.

The hippo therapy with Phillis and Salih was super. The way there was onerous (I had to take a travel sickness pill otherwise I would have been nauseous). But it was very much worth it. Anna has been riding for 6 years but the Hippo therapy in Turkey was totally different. Not to be compared with Germany. Though Anna liked Salih’s black hair best.

Uniting all the therapies makes a very good combination. We think that this is the key to success. One is always under way and there is so little free time. But parents know that before-hand. It was no problem for us to travel with Anna. She enjoyed it and there is nothing more important than Anna’s well-being.

Some parents say that it causes a lot of stress for the children. Yes, there was a lot of input for Anna, but nothing she couldn’t cope with.

Barbara informed us that Anna could understand 100% of everything that is said to her although she cannot speak. At the introductory talk I could give no answer to this question. We are so happy and glad now that we know the answer. Of course we handle Anna differently now, we are more demanding even if it doesn’t always work the first time. As parents we have naturally learnt a lot but so has Anna learnt about us. Barbara made a nice quip – Anna needs the rough with the smooth. And this is what we attempt to achieve at home. Our little ‘witch’ knows exactly what she wants. This was so important for us. 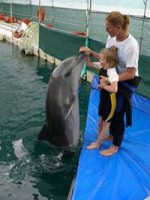 After 2 months since the therapy we can say the following:

Anna is a lot quieter. She doesn’t flounce about so much
She is alert and communicates more with us. Her facial expressions are more lively
Anna can scale some stairs, alone!
She laughs more with people that she knows
Anna perceives her surroundings more intensively
She is a lot more stable and can hold her balance better. Anna takes more and more steps on her own. A great success!!
Anna gabbles more and tries to speak. This has become much more intensive.
Anna is more devoted and likes to cuddle
Now that we are home again she eats a lot more. Her mouth closure and chewing movements have greatly improved
Things are not put directly into her mouth but inspected first

Summing up: The therapy in Turkey helped Anna and ourselves.We have made a lot of progress. Anna’s Grandparents said ‘You’ve brought a different Anna home’. And that is exactly what we have done!

We would like to say here a special thanks to the ‘4 special kids’ club and Anna’s Grandparents who donated a part of the therapy costs. We shall start saving for our next visit to turkey ! We definitely want to see Barbara, Splash and the whole team again.