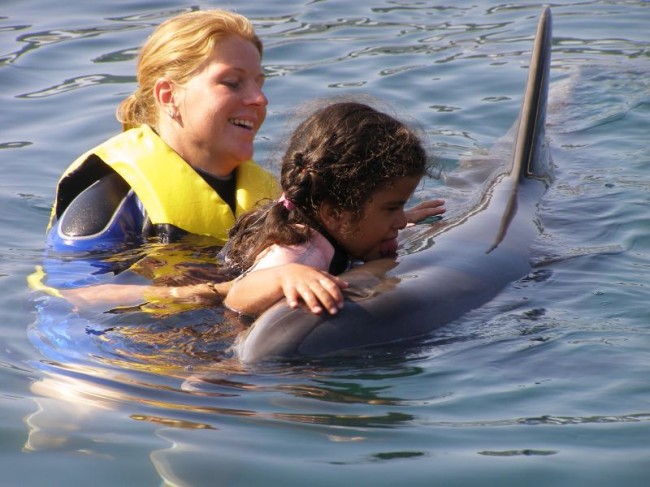 Dramatic Meeting: Dilsah Sue with a therapist at work with a dolphin. The animals in Marmaris live in a free-water dolphinarium. Her mother is fighting for a further course of treatment.

Dilsah Sue is blabbing. The past year the girl with the dark eyes manages in this way to communicate that she wants to say something. For longer than this she has been able to walk. In 2007 she managed to get up off the floor for the first time and then, slowly but progressively, over the following year she learned to walk. This was a big achievement for the nine year old and her family.

Dilsah Sue came into the world with a hernia of the diaphragm. In the sixth month of pregnancy the doctors diagnosed that the diaphragm of the little girl had not closed. The organs in the stomach region were not held in place and put pressure on the lungs. ‘That was really bad news’ said Dilsah Sue’s mother, Bahar Coskun. But in spite of the bad prognosis she decided to wait and look ahead. ‘What the Doctors said to me didn’t matter to me. I realized that the baby inside me responded to me . I decided that I would give my daughter all my love to support her when she is born.’ Dilsah Sue was a longed-for child.

In the 34th week the baby was born, and had to have an operation. The doctors closed the diaphragm. The doctors also diagnosed Balkanagenesis. This means that the connection between the two halves of the brain had not fully developed. The baby had to stay in hospital for six months. Dilsah Sue was connected to breathing apparatus and had to be tube-fed. ‘The doctors told me that my daughter would remain bed-ridden and that I should not expect her to develop.’ said Bahar Coskun.She is happy that through her whole energy and undivided love she has been able to disprove these forecasts.

Six months after the birth of her child, Bahar Coskun insisted that she should take her child home. And very slowly the little Dilsah Sue did develop. ‘With her, every bit of progress is like winning the Lotto’ said Bahar Coskun. A few weeks ago there arose a further situation. At mealtime the girl took the fork in her own hand because the feeding was too slow. ‘We all cried’ said her mother.

A Dolphin Therapy had helped towards developments. ‘I had heard of it at some point. With the help of Dilsah Sue’s Aunt Theres Ilskens we managed to collect together enough money for the treatment in Turkey.’ On the second day the girl took great notice of the dolphins. On the tenth day she stood up in her Hotel room. We couldn’t believe it!’.